Video poker is quickly emerging as a popular casino game around the world. Players are only now beginning to learn that video poker has a house edge that is significantly lower than playing at a slot machine. Video poker games have the look of a slot machine, however, instead of spinning reels, players receive a hand of cards they will play from. This guide will offer an extensive and exclusive breakdown of every video poker game available at online real money casinos.

Video poker is another way of playing the classic card game of poker, without the crowds and tables. Instead, video poker is played on what looks like a slot machine, and uses the same random number generator software. Every video poker game is determined by this software, making the outcome entirely random and fair. Another similarity that video poker shares with the slot machine is they both have a pay table. A pay table is a list of outcomes or combinations and how much they will pay. Slot machines makes use of a combination of symbols to determine a winning outcome, whereas in video poker, your hand determines if you win. By knowing how much each hand will pay, players are able to calculate their overall payback percentage.

The original video poker is known as Jacks or Better and is played with a standard 52 card deck as follows:

How to Get the Best Hand in Video Poker

Every round of video poker is determined by your hand and if you have something that matches the pay table. By knowing what hand you could possibly build or get dealt, you will know exactly what your payback percentage will be. Here is every kind of hand that you can win with in video poker:

Each hand stated above makes the pay table and will payout players according to their rank. Pairs have the lowest payback percentage and a royal flush has the highest. However, always remember that the house edge in video poker games are always better than playing at any slot machine.

Deuces Wild has a lot in common with the Jacks or Better video poker game. Both these video poker games deal out a hand of five cards. Players may also choose which cards they want to keep and which they want to replace to strengthen their hand. Ultimately, the payout you receive will be based on the strength of your hand.

The main difference with Deuces Wild to the original video poker is the introduction of wild cards. In this video poker game, the deuces can be used to replace other cards needed to make a stronger hand. The typical Deuces Wild pay table changes to reflect this.

Another difference with the common Deuces Wild pay table is that you need a much better hand to qualify for a payout. Two pairs and a pair do not payout in this video poker game and the lowest hand is a 3 of a kind. 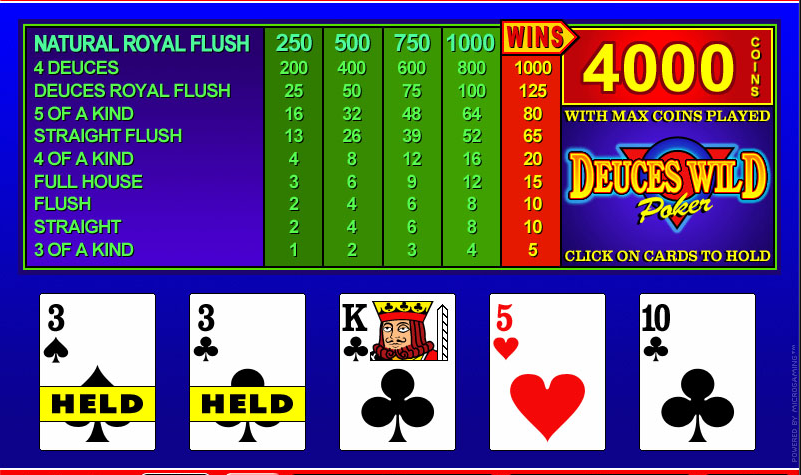 Besides the two video poker games mentioned, there are also others available to play at top online casinos. Here is a list and description of every video poker game you can play at a casino site we recommend:

This video poker game is the best and most common variant of this casino game. Gameplay is simple to understand and follows the rules of the classic card game of poker. Jacks or Better is ideal for new players and for experienced poker players. The payout is 9 times the bet you placed.

Video poker only gets more fun when you start trying out the different variations of the original video poker. This video poker game also uses a 52-card deck, with one added surprise.  The major difference in Jokers Wild is the introduction of a Joker, which can replace any card of your liking to make a stronger hand.

This is a video poker game that raises the stakes by introducing two Joker cards. This will help you get a stronger hand and more often. Deuces Wild will surely have players entertained and increasing their overall payout percentage while doing it.

This video poker game offers players the same gameplay as Jacks or Better, but with a bonus payout for a four of kind. The amount of the bonus is determined by the rank of the four of a kind you have in your hand.

Players who feel extra lucky are in for a real treat when they play Double Bonus. This is essentially a variation of Bonus Poker with greater payout potential. In this video poker game, players receive an extra bonus payout for having a hand with four Aces.

If you want greater payouts with more excitement, Double Double Bonus is the video poker game for you. Similar to Double Bonus, except that players will receive an extra payout for a hand with any four of a kind.

Unlike the slot machine, video poker makes use of a bit of skill and strategy. Golden Riviera Casino provides players with all the best strategies, no matter which video poker game they decide to play:

What is video poker?

Which is the best video poker game to play?

A premium online casino is a casino that caters for a variety of players. There are video poker games to suit every budget and preference. Some of the best video poker variations include Jacks or Better, Deuces Wild and Jokers Wild.

What is a Random Number Generator?

A Random Number Generator is software that is used in every slot machine and video poker game. This software generates multiple sequences of outcomes every second. When you eventually hit the “deal” button, the sequence at that exact moment becomes your given outcome. This doesn’t display as numbers, but as cards that make up a hand.

Check out our video poker guides: