Meet ancient mystical gods that take the form of majestic beasts in Realtime Gaming’s Ancient Gods slot game. Spin the reels and come face to face with powerful beings in charge of the universe in this wonderful slot game filled with great visuals and even better bonus modes. Read more below.

Ancient Gods is a classic RTG game with five reels and 25 adjustable paylines. As may be deduced from the game’s promotional image, it makes use of an Asian mythological theme with dragons and phoenix symbols soaring across the reels. The imagery used in the title is quite amazing and the soundtrack that accompanies it completely fitting. 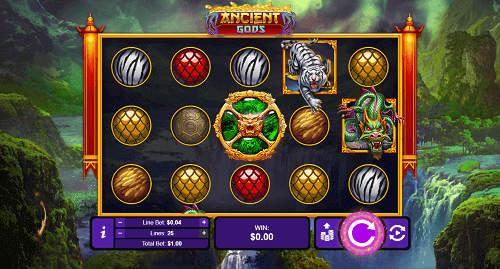 The game only makes use of symbols that relate to the theme. Some designs that players will see zooming across the reels include scales of multiple different colours, a tiger, phoenix, snake and turtle, among others. The game does feature both a wild and scatter symbol. The wild is a yellow dragon and the scatter is a golden medallion with gemstones in it.

Ancient Gods features a single bonus mode. It is a free spin feature that players activate by landing three or more golden medallion symbols on the reels. Initially, players will be awarded with 10 free spins. However, during the game mode, it is possible to increase this total by landing more scatters during the bonus mode.

It is important to note that if players land four golden medallion symbols when activating the mode, all wins will be doubled. If they activate the mode with five symbols, wins will be tripled.

Ancient Gods is a wonderful casino game that includes classic tales of Asian mysticism. We really enjoyed our time with it and feel that it is a good addition to the growing collection of slots in the RTG catalogue based on this theme. It is for this reason we have decided to give it a rating of three out of five.