Dragon Orb is a fantasy-themed slot game published by Realtime Gaming. Instead of presenting dragons as creatures that bring dread and despair which should be feared with every last inch of your being, the game represents them as being that could bring you good fortune. So, read on down below and find out how you could win riches with RTG’s wonderful Dragon Orb slot game.

Dragon Orb is an RTG five-reel slot game with three rows and 25 paylines. The game features a strong Oriental-inspired theme that is filled with references to mystical treasure only fit for those truly worthy. That said, the game’s imagery is simply sublime and truly makes players feel as if they’re on a quest in the Eastern hemisphere. This is helped by the game’s awe-inspiring soundtrack that inspires an ambiance that many may have previously felt was unattainable. 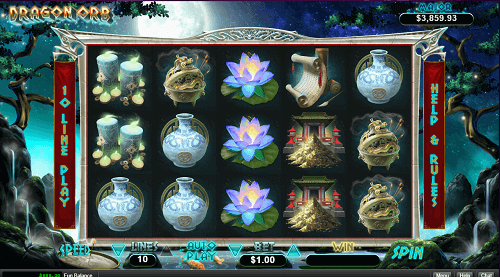 The title’s symbols are all theme-related, and includes images of a scroll, a vase, a cresset, scented candles, a mystical temple, a lotus flower and a dragon statue, among others. Important to note is the Dragon Orb itself, which acts as the game’s wild and can be used to substitute for any other symbol to create winning combinations.

Dragon Orb makes use of one major bonus feature. It can be activated by landing the wild symbol on reels 2, 3 and 4. When the wilds land on these reels, they will expand to take up the whole reel. This means more wins for the player, especially as it activates the Wild Re-Spin Feature. Players will keep receiving respins as long as extra wilds keep coming up on screen. They are also given a chance to win one of the game’s two enticing jackpots.

Dragon Orb is a fun-filled slot game that tries to change the world’s perception of dragons in an interesting way. We love the game and so we’ve decided to give it a rating of four out of five stars.

Begin your journey into the mythical land of dragons at any one of the wonderful casinos listed down below: