Prepare to fight for the honor of China using Jackie Chans fists of fury in Realtime Gaming’s martial arts-inspired slot game – Eagle Shadow Fist! Protect China from Japanese attacks and you may find yourself winning some very lucrative prizes. Read on to learn more about this great slot game.

Eagle Shadow Fist is a five-reel, three-row slot game with 25 paylines published by RTG. The game uses a 1973 martial arts movie of the same name as its theme. The film follows the story of a famous Chinese actor defending his village from the Japanese during the Second World War. The overall Oriental basis is easily visible from the game’s backdrop, which features some bamboo and a temple. The visual quality does leave something to be desired when compared to movie-based slot game spinoffs made by other publishers.

The game’s symbols feature theme-related and playing card symbols. The theme-related symbols include five fighters from the movie, including Jackie Chan himself. There is also a wild symbol which takes the form of a golden square with a fist and a scatter which has two martial artists going at it with a purple background. 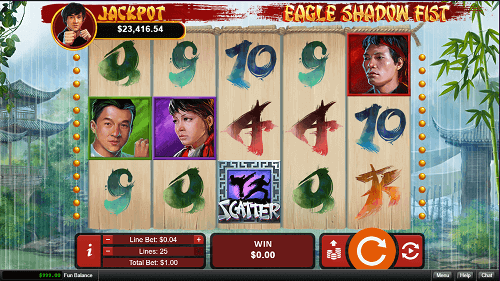 There are two real bonus modes to look forward to in Eagle Shadow Fist. (This is aside from the fact that landing five wilds in a singular line will give you a massive payout.)

The second bonus feature is that of the progressive jackpot, which can be won randomly throughout a player’s session. There really isn’t a number of plays that are required in order to trigger the jackpot.

Eagle Shadow Fist hasn’t got the best visual and isn’t based on the most well-known of films. It does, however, provide players with a good time and gives them the chances to win big real money prizes, which a good slot game is meant to do. It is for this reason we’ve decided to give Eagle Shadow Fist a rating of three out of five stars.