Explore the exciting traditions of the Chinese New Year in Realtime Gaming’s Fu Chi slot game! Party it up with traditional Chinese lanterns, lotus flowers and more as you spin the reels on this fabulous slot game. Some players stand a chance of starting the year with a bang with the game’s two progressive jackpot prizes. Read on to find out more.

Fu Chi is a five-reel slot game with a grand total of 50 paylines. The game makes use of an Oriental-theme. While it does have a clean finish, the game is not quite as pretty as RTG’s other games that make use of a similar theme. That said, players will still feel as if they’re deep on a quest in Ancient China.

Game symbols are made up entirely of theme-related symbols. Some images include firecrackers, Chinese Apples, multiple Chinese characters and coin bags, among others. There is also a wild which takes the shape of the Chinese Lucky Dog. Then, there is also a scatter symbol which takes the shape of the Zodiac sign. The scatter can also be substituted with a wild. The great thing about finishing combinations with the wild is that all winnings are automatically doubled. 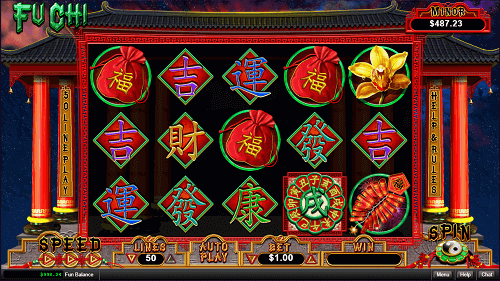 Fu Chi is a Realtime Gaming title, so it is natural that the free spins feature would be the game’s core bonus mode. To trigger the mode, players need to land at least three Zodiac symbols on the reels. Depending on how many they land and how they complete combinations (whether or not it includes a wild), they’ll be gifted with between 10 and 60 free spins. It is possible to retrigger the feature during the free spins mode, meaning an additional 60 free spins for the player. It must be noted that all wins are tripled during this bonus mode.

The second major bonus mode in Fu Chi is the random trigger of the game’s two progressive jackpots. Players don’t really need to do anything to trigger these jackpots as they can be won randomly.

Fu Chi is a reliable slot game, which is filled with some interesting features that may lead to some big wins. We do think that it is not as good as other Oriental-themed slot games in Realtime Gaming’s vast library, but it still provides a good experience. It is for this reason, we have decided to award the game a rating of three out of five.