When most Americans dream of a first-class lifestyle, they think of the world’s most precious gems, including diamonds, rubies and emeralds, among many others. Realtime Gaming’s slot Gemtopia attempts to give players a hint of that sought-after lifestyle with the beautiful pieces spinning across the reels and the chance to win massive real money prizes. Read on to find out more about Gemtopia.

Gemtopia is a five-reel slot game with 15 adjustable paylines. As the name may already suggest, the game features a gem-inspired theme. As far as RTG slot titles go, we can’t really say that this game has the best graphics, but it isn’t all that hard to look at either. The title’s sound design adds to the overall experience, making it an overall tolerable gambling game. 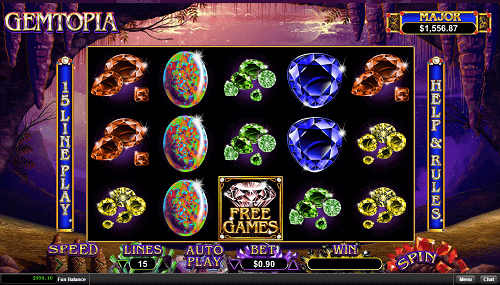 The game’s symbols are all theme-related and take the shape of many wonderful multi-coloured gems. The colours of the gems players will see spinning across the reels include blue, red, green, brown and yellow. There are also small and large gem symbols which are different based on payout. The game does make use of both a wild and a scatter. The wild is represented by the game’s logo whereas the scatter is by the giant “Free Games” symbol.

Gemtopia features two major bonus modes. The first is that of the game’s Wild Re-Spin feature which can be activated when an expanded wild appears on the reel. The reels will then respin and players will be awarded extra prizes. If by chance another wild appears on the reels during the respin, players will be awarded an additional respin. (Please note that this bonus feature is available in multiple RTG slot games.)

The second major bonus mode is the free spins feature, which involves the scatter symbol. Players can trigger this bonus feature by landing three scatter symbols on the reels. They will then be awarded 15 free spins, which can be added to by landing bonus gems. Bonus Gems also award players with rewards that are 1000x their initial bet.

We’re not going to lie to you; Gemtopia isn’t the best-looking Realtime Gaming slot. However, that doesn’t take away from the fact that it does provide players with a solid gameplay experience. It is for this reason that we have decided to award Gemtopia a rating of three out if five.