Sail the scary seven seas and go up against foes scarier than the legendary Blackbeard as you traverse the Caribbean in Realtime Gaming’s (RTG) ode to piracy – Ghost Ship. Sail across dangerous waters and live to tell the tale with riches beyond your imagination in this wonderous video slot. Read on to find out how.

Ghost Ship is a five-reel progressive slot game with a total of 25 paylines. The title makes use of a pirate theme that is hauntingly fun and filled with scenery that will make players think of the Golden Age of Piracy, but in a darker light. The game also makes use of a sound design that will keep players interested in wins. 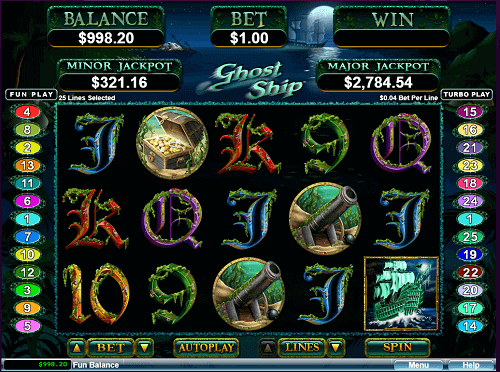 Symbols are made up of the good, old traditional combination of theme-appropriate and playing card designs that is commonly seen in video slots.  Some of the lovely pirate symbols include the treasure chest, mermaid statue, cannon and a Flying Dutchmen bell. The game’s wild symbol is the menacing ghost captain whereas the scatter is the ghost ship after which the title is named after.

Ghost Ship provides one bonus game mode through which players can strike it rich – the free spins bonus mode. Players trigger it by landing three or more ghost ship symbols on the reels. They will then unlock two free spins for how ever many ghost ship or captains appear on screen. This means up to a maximum of 40 possible free spins can be won in one go. Players will also get a x2 or x10 multiplier added to any wins they make during the round depending on how many scatter symbols activated the feature.

Ghost Ship is a great addition to the already enticing RTG video slot family. The game gives players a chance to win a great progressive jackpot while exploring new places. It is for this reason we have decided to give Ghost Ship a rating of four out of five stars.