Goblin’s Treasure is a slot game by Realtime Gaming (RTG) that makes use of a wonderful fantasy theme that excites so many players. US Gamblers attempt to retrieve the goblin’s treasure from the lair without getting stopped along the way. If they are lucky enough, they will walk out with some insane real money prizes with the amazing bonus modes. Read on to find out more.

Goblin’s Treasure is a fantasy-themed slot game published by RTG. It has five reels, three rows and 25 paylines. The game’s graphics aren’t that bad, but they also aren’t the best that we’ve seen from RTG. The sound design is enough to keep you playing though, with some very enticing effects for when players win. 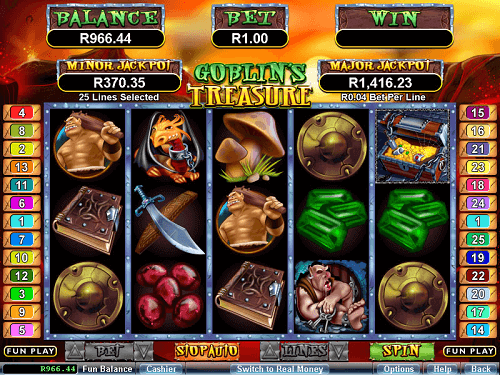 Symbols all relate to the theme. Some of the designs include mushrooms, a shield, a treasure chest, red gems, blue gems and green gems, among many others. The game does feature two wild symbols in the form of a goblin and a treasure chest. There is also a scatter, which takes the form of a castle.

Goblin’s Treasure features two bonus modes. The first involves the wild symbol. Basically, all wins that feature a wild symbol are multiplied by five. It is important to note that scatters do not activate the free spins mode but rather only act in multiplying wins by the total bet placed.

The second bonus mode is that of the free spins mode. Players activate it by landing the two wild symbols on the reels at the same time. Players will then be awarded 10 free spins. The size of the multiplier is dependent on the number of goblins that appear on the first reel. The multiplier can reach as much as x5. It is also possible to retrigger the feature.

Goblin’s Treasure is an amazing slot game, but it does lack in a few areas. Firstly, we don’t believe that the graphics have really kept up with the times. Secondly, the bonus mode uses a format that may annoy some players who are used to scatters triggering a bonus mode. It is for this reason we have decided to give the game a score of four out five gold stars.