The life of a pirate is one that is filled with great riches and adventure and now American gamblers get their own chance to live and breathe such an existence with Realtime Gaming’s (RTG) Goldbeard slot game.  Scavenge the mighty sees for worthwhile plunder and you may just take some of it home. Read on to find out more. 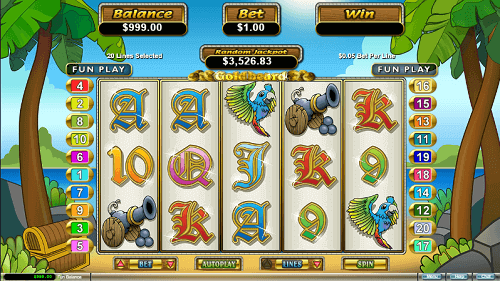 Goldbeard is a five-reel slot game published by RTG with 20 paylines. The game features a simple animated artstyle that will remind you of off-brand Disney cartoons you may have watched as a child. The game’s simple sound design is also quite immersive and edges gamblers to keep going. With a low betting range of between $0.01 to $0.25 per payline, this is a perfect option for low rollers.

The title’s symbols are made up of a combination of theme-appropriate and playing card designs. Some of the symbols inspired by the theme include a cannon, a parrot, a treasure chest and a ship. The Goldbeard symbol (that of the pirate) is the game’s wild and can be used to complete combinations. In addition to this, it also multiplies all wins by two. The scatter symbol is represented by the gold coin and players can earn up to 100x their stake by landing five of these symbols on the reels.

Goldbeard has one major bonus mode, which is triggered by landing the game’s wild symbol on reels one and five. Players will then be gifted between two and four free spin. Although this may see very few, it is possible to earn up to 24 free spins by landing more Goldbeard symbols on the reels during the mode. Players should also note that all wins made during this game mode will be tripled.

Goldbeard is a good slot game that provides players with a small bankroll a chance to make some money. However, it is limited by its rather lackluster bonus mode. It is for this reason we have decide to give Goldbeard a rating of three out of five.