Have you ever wondered what it is like to live on a farm? Well, now you can find out in Realtime Gaming’s Hen House slot game, which is filled with all the farm animals you learnt about as a kid but have probably never seen in real life. Learn about how you can win big real money sums by reading on down below.

Hen House is a five-reel slot game with three rows and 25 paylines. We’re not going to lie, but the game has some pretty outdated graphics that seem rather similar to an 80s cartoon rather than a modern-day slot title. The soundtrack does add to the overall feel of the game, and does make players feel as if they’re living through some old, childhood nursery rhymes. 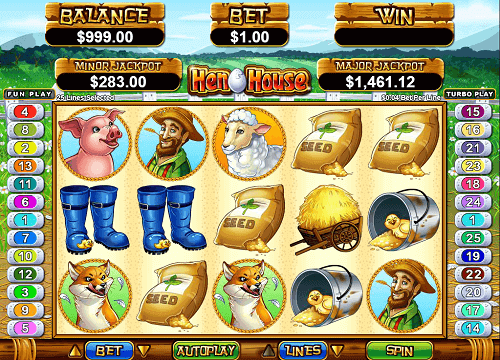 The title’s symbols are made up entirely of images that relate to the overall theme. Some include a pile of hay, seeds, a cute little pig, an adorable chick in a bucket, a giant egg, a proud rooster and a hungry looking fox. The game does feature a wild symbol, which is the white hen. There is also a scatter which is represented by the giant egg.

Hen House features one interesting bonus game. Essentially, players activate it by landing three or more scatter symbols on the reels. Players will then click on the scatter symbols to reveal wonderful prizes. These can be instant wins, bonus symbols or even an unfortunate rotten egg. Should the player pick correctly, they will be given five free spins and a multiplier.

The free spins mode progresses in the following manner:

Hen House might not have the best-looking graphics or the most compelling theme, but it does feature a 50000x win opportunity per betting line, which isn’t really seen in other slot games. It is for this reason we have decided to give the game a rating of four out of five stars.