Raid ancient Mayan tombs in South American jungles in Realtime Gaming’s (RTG) Hidden Riches slot game. Avoid ancient dangers, and open never-before-seen treasure in this exciting adventure gambling game. With so many bonus modes that give you some great chances to win big, you won’t want to miss out on giving this game a go. Read on to find out more.

Hidden Riches is a Mayan-themed slot game that tries to bring the whole idea of going on an Indiana Jones-esque adventure to life. It has five reels, three rows and a total of 25 paylines. The game’s graphics aren’t bad but they also aren’t the best we’ve seen from RTG. The title’s sound design does try to put players in a mindset that they truly are exploring South American jungles. 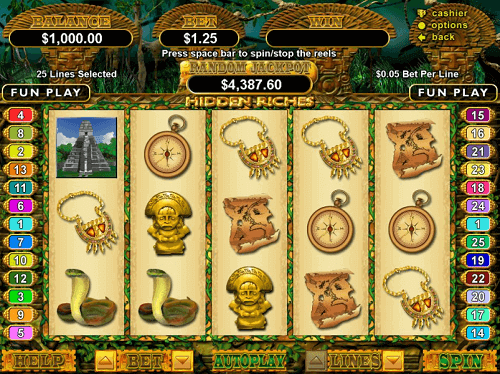 Symbols consist only of designs that relate to the theme. Some of the designs players can expect to see zooming across the reels include a knife, a snake, a vase, a green gem, a weird necklace and a temple, among many others. The symbol consisting of an adventurer doubles both as a wild and a multiplier. There is also a scatter symbol, which takes the form of a weird tablet like shape.

Hidden Riches has got two major bonus features. The first is that of the free spins bonus, which is pretty much seen in every RTG game. Players activate by landing either two or three adventurer symbols on the reels. They will then be awarded either five or 25 free spins. It is possible to retrigger the feature by landing the appropriate number of adventurer symbols. Winnings gained during this mode are paid out at the bet amount placed on the spin that triggered the game mode.

The second bonus feature is that of a spin the reel variety. Players trigger it by landing three tablet symbols on the reels. It is possible for players to win up to 2000x their bet in this bonus mode. This is then not even to mention the progressive jackpot prize available in the game.

There is no denying that Hidden Riches is a fun game. We had a good time with it and it proved to be pretty profitable. If the graphics were a bit better, we would have no problem giving this game a perfect score. However, since they aren’t, we will have to give it four out of five stars.