Incan Goddess is one of the many slot games in Realtime Gaming’s (RTG) library that offers US players the chance to explore ancient South American civilizations. It is also a slot that just seems to be giving money away with its great bonus features and payout rate. We decided to have a look at the game ourselves. Read on to find out more.

Incan Goddess is a return to the tried and trusted theme of ancient civilization slot games, which has always proven to be a popular favorite with US gamblers. The game features five reels, three rows, and 20 paylines. It is a bit old, so players can expect to be greeted with some dated graphics. But these shouldn’t be too bad for most players. The sound design is quite amazing though. 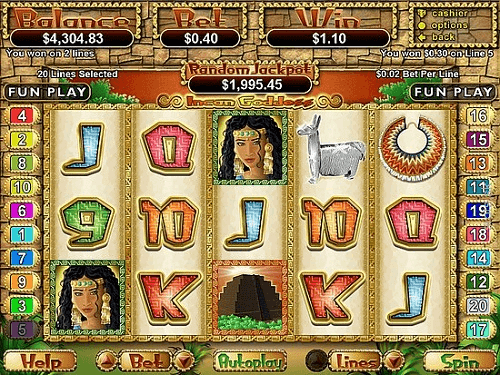 Incan Goddess features two bonus game modes. The first is the free spins game mode. Players activate it by landing three or more temple symbols on the reels. They will then be awarded 12 free spins. All winnings gained during this mode are subject to a x2 multiplier. However, if you complete a winning combination with a wild, the multiplier goes up to x4.

The second bonus feature is called Double or Something. It is activated when players get a five-of-a-kind win. Players then have to pick between to buttons. If they choose the correct one, they will double their prize. If not, their prize remains the same.

Overall, we enjoyed Incan Goddess. There are some complaints to be made in the vain of “old game is old”, but it is still able to deliver a fun experience. Not only that, the game just seems as if it wants to give money way. It is for these reasons, we have decided to give Incan Goddess a rating of four out of five.