Prepare for a springing fiesta with Realtime Gaming’s (RTG) Jumping Beans slot game! Follow a story filled with love, drama and fiesta’s with Mr and Mrs Bean – the game’s two jumping bean lead characters. Read on to find out more.

Jumping Beans is a three-reel slot game with only five paylines. Although the game features a theme and makes use of some bonus modes, it does feature strong elements associated with classic slots. The theme is centred around Mexican-culture and thus, the game is quite colourful and features a wildly inviting background that will make you think of a wild fiesta. 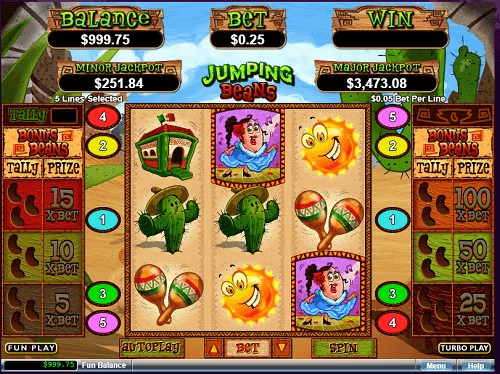 The title’s symbols are entirely theme-related. Some of the designs that players can expect to see spinning across the reels include maracas, a friendly-looking cactus, a guitar, a rose, multiple forms of tacos and a restaurant, among others. The game’s wild symbol features Mr Bean (a Mexican jumping bean and the title’s lead character) whereas the scatter features Mrs Bean.

Despite being a classically-inspired three-reel slot, Jumping Beans does feature some an interesting free spins bonus mode. As usual, players need to land three scatter symbols on the reels to activate it. They will then be awarded 10 free spins. During this game mode, if any Bean-related symbols appear, a bonus will be added to the player’s final prize.

The total bonus prize is dependent on how many beans players collect. There are a total of six levels and players go up in levels by collecting three beans at a time. Ultimately, players can win up 100x their stake during the bonus mode.

Jumping Beans is a fun slot game filled with wonderful dynamics. It will prove to be a riot for any player who is a big fan of three-reel games. It is for this reason and more that we have decided to award RTG’s Jumping Beans a rating of four out of five.