Get ready to put on your spandex and defend your championship belt in Realtime Gaming’s Mexican luchador-themed slot game – Lucha Libre 2! Continue Taco Malo’s journey as he attempts to take down his newest rival – the fierce Nacho Friend. Play now and walk away with prizes fit for a championship wrestler! Read on to find out more.

Lucha Libre 2 is a five-reel slot game with three rows and a total of 30 variable lines. As previously mentioned, the game puts players in the role of a Mexican luchador known as Taco Malo. With the game being inspired by Mexican-tradition, it is only natural that it uses many beautiful colors. Above all, Realtime Gaming has really outdone itself with amount of effort gone into creating a believable animated world filled with characters with interesting designs.

The game makes use of only theme-related designs, such as a referee, tequila shots, spectators, bottles of cola, albums, green peppers, stickers and a taco. The game does include a wild, which is represented by good old Taco Malo, and can be used to complete winning combinations. If players are able to line up three wilds on a single reel, they are awarded with a nice 10x multiplier. There is a also a scatter symbol simply title Mucho Mayhem that activates one of the game’s bonus features. 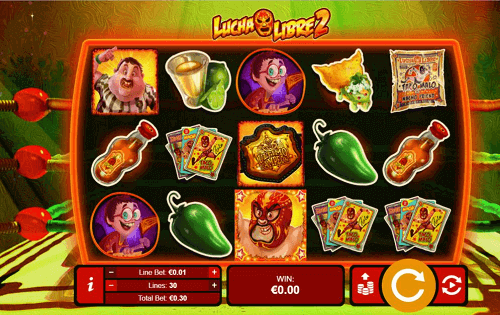 Aside from the interesting wild feature, Lucha Libre 2 makes use of two very interesting bonus features. The first is known as Time to Rumble. All players need to do is land three scatter symbols on the reels to activate it. Then, they will then be made to choose between three fighting moves for their battle against another wrestler. Players will then be awarded free spins and multipliers depending on the moves they choose.

During the free spins mode, fist symbols will appear on the reels. If players are able to land two fist symbols along with three wild symbols on the appropriate reel, they will trigger the game’s re-spin feature. This mode is known as Fist of Fury. It is quite lucrative.

Lucha Libre 2 really seems to be Realtime Gaming’s best slot games. In addition, the game makes use of an inviting design as well as profitable bonus features. Thus, the team here at Golden Riviera are happy to award this game a rating of four out of five.