Penguin Power is an exciting Realtime Gaming (RTG) slot game with an amazing Arctic theme. Players will see cute sea animals spinning across the reels as they play for the chance to unlock some fabulous riches. With the game being a popular title with US players for some time, we decided to take a look at it. Read on to find out what we found.

Penguin Power is a five-reel slot game and 20 paylines powered by RTG. The game is somewhat old; thus, the game’s graphics are somewhat dated, but they are still fully capable of making players feel as if they are visiting the Arctic. The watercolor theme actually makes it somewhat different from other famous RTG slots. The sound design also makes for an interesting gameplay experience. In fact, it makes players want to keep going. 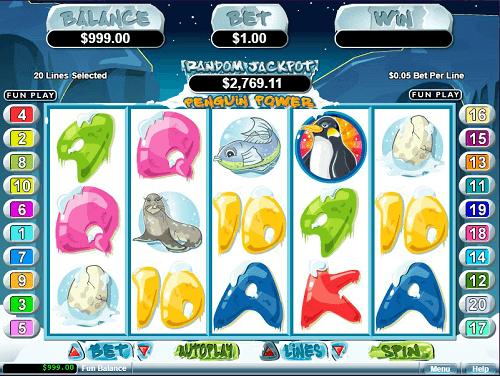 The title’s symbols are made up of a mixture of both theme-inspired designs and playing card symbols. Some of the designs that relate to the theme include a rather plain looking fish, an egg, igloo, seal, penguin and so much more. There is a wild symbol that can be used to complete winning combinations. This symbol is represented by the baby penguin symbols. Then, there is also a scatter. It is represented by the igloo symbol.

Penguin Power has got two major bonus mode. The first is a general free spins bonus. Players activate the mode by landing three at least three scatter symbols on the reels. Depending on how many scatter symbols, players will be awarded five and 25 free spins. It is important to note that during the bonus mode, extra wild and scatter symbols will be added to the reels to gift players more wins.

The second major bonus mode involves landing a wild and scatter symbol on the same line. The y will be then be gifted up to 10 free spins. Wins in this mode range from five to 100 times your original bet.

Penguin Power looks to be a fun and exciting game despite its age. The cute graphics and the game’s willingness to payout players has already made it pretty popular with US players. We enjoyed our time with the game, which is why we have decided to award the it a four out of five rating.