Get ready for a fiesta with Realtime Gaming’s wonderful Mexican-themed slot game – Popiñata! With piñata-themed symbols, players can expect a party with a load of fun real money prizes and experience that is sure to keep them coming back for more. Read on below to find out more about this wonderful game.

Popiñata is a five-reel slot game with three rows and 10 paylines published by Realtime Gaming. The game makes use of a Mexican-theme, which is easily noticeable with cacti and sombrero featured in the background. As one may expect from a game based on a “fiesta-based” culture, visual elements make use of vibrant colours and a wonderfully festive soundtrack. 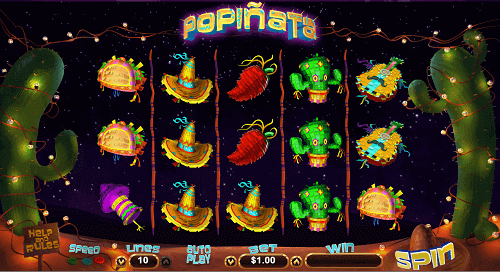 All of the title’s symbols relate to the theme and look like piñata versions of the items they’re illustrating. The symbols players can expect to find zooming across the reels include, a cactus, a bottle of tequila, a taco, a pepper, a guitar and a firework, among others. The donkey symbol acts as the game’s wild symbol, and completes winning combinations. (This really shouldn’t be all that surprising as the game’s logo features a donkey.)

Popiñata has one major bonus feature. Players activate it by landing wild symbols on reels 2, 3 or 4. The wild will then expand across the entire reel and locks down for a singular respin. This gives players an opportunity to get even more wins. Should another donkey symbol appears during this round, players will be gifted an additional respin.

Popiñata is a really great addition to the RTG game library. It features an interesting theme and an even better visual design. However, we are a little disappointed in the game’s limited bonus functions, and thus we have decided to give the game a rating of three out of five stars.