Get transported to the 1950’s golden era of rock ‘n roll where slicked-back hair, bad dancing, and wearing black shoes with white socks are all still a thing in Realtime Gaming’s (RTG) homage to a rock icon Ritchie Valens La Bamba! Play this amazing slot game and stand a chance of hitting it big with all the wonderful real money prizes. Read on to find out more!

Ritchie Valens La Bamba is a six-reel slot game with 729 possible paylines. The game makes use of a 1950s diner theme that will make players feel as if they’re watching a scene straight out of Grease (especially with that black and white linoleum floor background). The game’s soundtrack is obviously made up of some of Valens’ most popular hits to keep players rocking as they go. 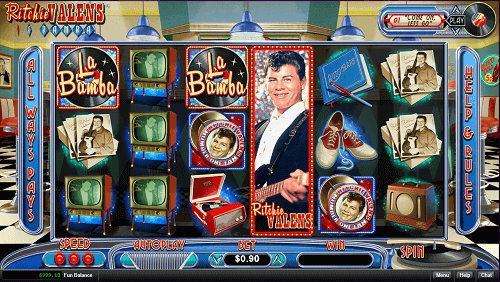 The game’s symbols are made up of entirely theme-related images; there aren’t any boring playing card designs here. Some of the symbols players will see spinning across the reels include guitars, gramophones, dancing shoes, radios, autographs, concert tickets, and some records. Naturally, Ritchie Valens himself is the game’s wild symbol, whereas the scatter symbol is represented by the La Bamba records.

As with most RTG titles, the centerpiece of the slot experience is the intensive free spins mode. Players just have to land four record symbols and they’ll be given 20 free spins. If players are able to trigger the mode with five or six scatters, they will activate the game’s expanding wilds feature. This means more wins for players. It is possible to win more free spins during the feature by landing more scatter symbols.

Ritchie Valens La Bamba is an amazing five-reel slot game that is sure to rock any US player. The game’s lovely theme pays homage to an American icon. It also offers players the chance to win big with a wonderful free spins mode. Thus, we have decided to give Ritchie Valens La Bamba a rating of four out of five.