Defend your honor and take charge in Ancient China in Realtime Gaming’s oriental-themed slot game – San Guo Zheng Ba! Engage in epic battles and adventures that could prove to be rather fruitful for you with great real money prizes. Read on to find out more.

San Guo Zheng Ba is a five-reel slot game published by Realtime Gaming. It features 50 adjustable paylines and a strong Oriental theme that invokes themes of adventure and righteousness. The game is beautifully-illustrated with imagery that seems to be a cross between anime and a Disney-animated film. 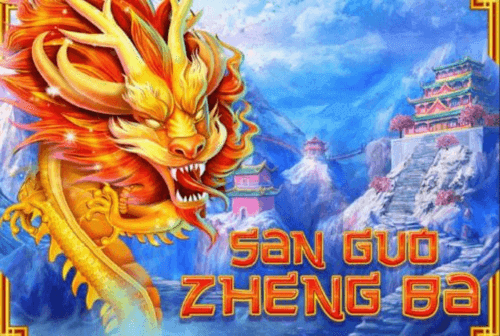 The game’s symbols are entirely theme-related. Some designs that players will see zooming across the reels include a shield, a breast plate the emperor, a chained weapon and three different mighty warriors. The dragon symbol is the title’s wild and only appears on the third reel, and when it does it covers the entire reels. The Emperor symbol is the game’s scatter and activates one of the game’s bonus modes.

The free spins game mode is really San Guo Zheng Ba’s claim to fame. To activate it, players need to land three of the Emperor symbols anywhere on the reels. Players will then get five free spins and wilds will now have a chance to appear on reels three, four and five. If you land two scatter symbols on the reels at this time, you will also be awarded a prize. Wins which feature a multiplier automatically get a x2 multiplier. It is possible to retrigger the free spins mode and win up to 25 spins.

At the end of the free spins mode, the game’s Super Spins mode will begin. Players get three possible upgrades for the game mode depending on how many Scatter wins they get in the previous mode. It is possible to get a bunch of Empress symbols, a fully wild reel, a 5x multiplier or extra Super Spins.

San Guo Zheng Ba is an amazing Realtime gaming slot title with an interesting free spins feature. The Oriental-themed game offers players a chance to experience a great adventure and win real money while doing so. It is for this reason we have decided to award San Guo Zheng Ba a rating of four out of five stars.