Witch’s Brew is Realtime Gaming’s (RTG) most recent take on a fun witchcraft and magic theme. Players brew some zany potions in an interesting and exciting lab and win some big real money prizes. It also features great bonus modes. Read on to find out more!

Witch’s Brew is a five-reel slot game with three rows and 25 paylines. It is one of RTG’s newer titles, meaning that the graphics are quite pretty and up-to-date with modern standards. As the game makes use of a general witchcraft theme, players can expect sound design to follow an eerie theme, which makes this game a perfect Halloween option. 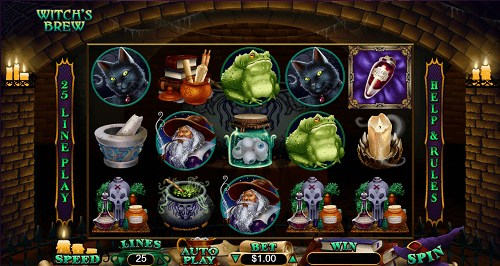 The game’s symbols are made up of only designs related to the theme, such as black cats, eyeballs, candles, mortar and pestles, toads, and cauldrons, among others. There are two wild symbols in this game: the witch and a dragon fang. These symbols can be used to replace others to create winning combinations. The game also features a scatter. It is represented by the “Goblin’s Blood” symbol.

Witch’s Brew features two major bonus modes. The first is the Witch Brew feature which players trigger by landing three wilds in the middle reels. During this feature, the centre reels remain frozen while the first and last reels respin 10 times over.

The second major bonus mode is that of the free spins feature. Players activate it by landing at least three scatter symbols on the reels. They will then be awarded between 10 and 125 free spins. It really is dependent on the number of scatter symbols a player lands. It is possible to trigger the Witch’s Brew feature during the free spins mode.

Witch’s Brew is definitely a fun game with a load of chances to win big rewards. We really enjoyed our time with it and saw some big wins with the Witch’s Brew feature. As previously mentioned, this is also a good title to get in the spirit of Halloween. With all this in mind, we have decided to rate it five out of five.