Experience the biggest war in Greek mythology for yourself in Realtime Gaming’s (RTG) famous slot game – Achilles! Fight in the Trojan War as you attempt o bring the decade long siege of Troy to an end so that you can plunder its riches in this exciting slot. Read on to find out more about this famous title. 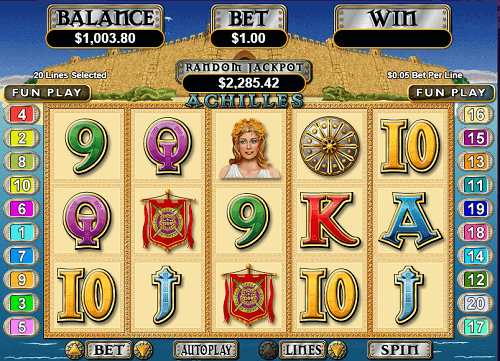 Achilles is a five-reel progressive slot game with 20 paylines, and probably one of the most famous titles in the RTG catalogue. As the name may already imply, the title is based off Greek mythology with the title character having come from Homer’s Iliad and Odyssey. The game has quite archaic graphics, which is to be somewhat expected seeing as it was made in 2006. The sound effects also help provide an immersive gaming experience.

The title’s symbols are made up of a mixture of theme-appropriate and playing card (9, 10, J, Q, K and A) designs. Some of the theme-related designs include Helen of Troy, a Shield, the famous Trojan Horse and a Crest. The game’s wild symbol is Achilles himself and he’ll substitute for any other symbol to create winning combinations. There is also a scatter symbol in the form of the City of Troy.

The second bonus mode is another free spins mode but it is activated by landing three or more Achilles symbols on the reels. Players will then need to pick one of the three Achilles symbols to reveal up to 25 free spins. During this mode, scatters will turn into additional wilds and winnings will be tripled.

Achilles may be an old RTG slot game that shows its age in terms of graphics, but it is still considered to be one of the greatest slot games ever put out by the software developer. It’s wonderful bonus modes and payout percentage ensures that American gamblers will have a good, fun time playing the game. It is for this reason that we have decided to rate this game five out of five stars.