If you think about Realtime Gaming progressive jackpot games, Aztec’s Treasure is one title that will immediately come to mind. The game has been around forever and created many new millionaires across the world. With the game being as popular as it is with our players, we decided to have a look at it for ourselves. 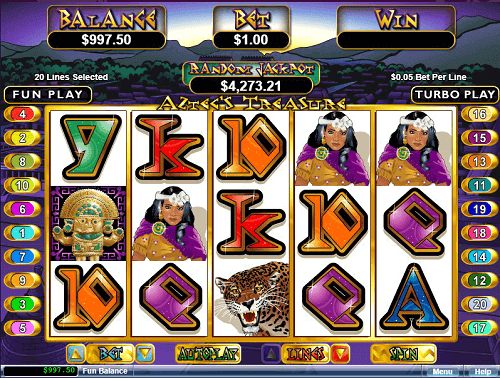 Aztec’s Treasure is an RTG slot game launched in 2009. It has five reels and a total of 25 paylines. As the name implies, the game makes use of an Aztec theme that players will either really enjoy or get annoyed by. Think of Disney’s Emperor’s New Groove film if you’re looking to understand what the theme and styling is similar to.

Aztec’s Treasure has one major bonus mode, the free spins bonus. Players activate it by landing three golden idol scatter symbols. They will then win 25 free spins. It is possible to win more free spins by landing more scatters on the reels during the bonus mode. All free spins winnings are subject to x3 multiplier. An important thing to note is that the scatter symbols can lead to players winning 100x their wagered amount if they land in any position.

Aztec’s Treasure is a cool, classic RTG progressive slot game. We won’t lie about the fact that it is beginning to show its age, but to appreciate new titles you always have to play the classics. It also gives US players the chance to win absolutely insane amounts of money. It is for this reason we have decided to rate Aztec’s Treasures four out of five stars.