Are you a fan of the vampire culture? Then why not give Realtime Gaming’s (RTG) Count Spectacular slot game a go. Released in 2010, the title has grown to become one of the most played in the software developer’s catalogue. It really is no surprise with the game’s 10000x stake jackpot. Read on to find out more.

Count Spectacular is a five-reel slot game published by RTG with three rows and 25 paylines. The game has a traditional animated style that will make players think of Disney films from their youth. The soundtrack fits with the game very well and creates great excitement when players win any real money prize. 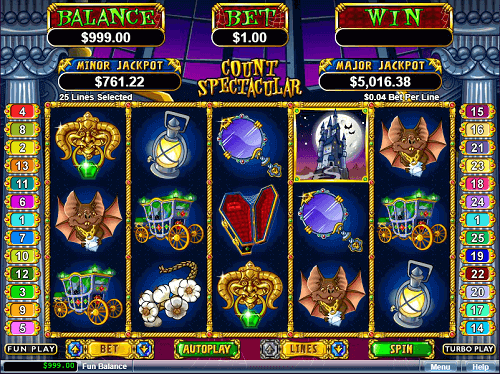 The title’s symbols are made up only of images that relate to the game’s overall theme. This include a coffin, a light, a bat, a carriage, garlic, a mirror, and a vintage door knocker, among others. Count Spectacular himself is the game’s wild and the symbol featuring a scary looking castle is the scatter.

Count Spectacular features two great bonus modes. Players activate both bonus modes when they land wild symbols on the first and fifth reel. Players pick the bonus round they activate by selecting one of the wilds.

Scatter wins are quite lucrative as all wins are multiplied by the total bet made. An important thing to note with the scatter is that the wild can complete winnings combinations featuring it.

Count Spectacular is an exciting slot game that provides players with some good chances to win big sums of money. However, we feel the bonus mode is not as  appealing as we would like it to be. It is for this reason we have decided to award Count Spectacular a rating of four out of five.