Coyote Cash is filled with zany, insane cartoon moments that will remind you of watching Looney Tunes on your grandmother’s television. The slot game, which was made by Realtime Gaming (RTG), is even better than those old cartoons though. It gives you the chance to win real money prizes. Find out more about the game and it’s wonderful features by reading on down below.

Coyote Cash is a five-reel slot game. It has three rows, 25 paylines, and was published by veteran casino software provider RTG. The game features cartoon themes that are quite reminiscent of the old Wile E. Coyote and the Road Runner show that have been on TV for near 70 years. We will say that the colours used in the game are somewhat more vibrant than those used in the cartoon though. 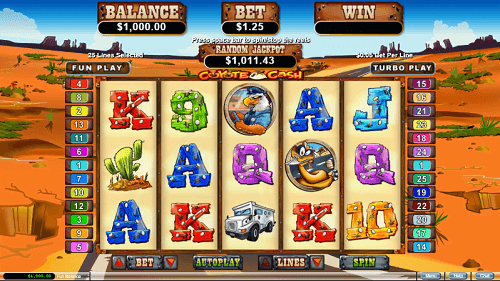 The game’s symbols are made up of a combination of playing card designs and those which relate to the theme. Some symbols, inspired by the theme, include a cactus, snake, car, eagle, skull, and a bag of cash, among others. Naturally, the title’s wild symbol is the coyote. The scatter symbol takes the shape of the big bag of cash. It is used to trigger the game’s main bonus mode.

There is one major bonus mode. It is triggered by landing at least three scatter symbols on thee reels. Players will then earn themselves 20 free spins. Additionally, all winnings are subject to a multiplier between 2x and 4x. The size of the multiplier is dependent on the number of scatters that triggered the mode.

Although this isn’t really a bonus mode, the game does have a progressive jackpot. If you are lucky to land five eagle symbols on a single row, you will win the game’s 5000 coin max prize.

Coyote Cash has grown to be come quite a big name in the RTG library since its release in 2008. After having some time with the game, our reviewers can see why. Although the title is old, it does still prove its worth in no time. It is for this reason we have decided to rate it four out of five gold stars.