Feel the adrenaline coursing through your veins in Realtime Gaming’s (RTG) street racing-inspired slot game – Dream Run! Edge through the streets at high speeds as you try to shift into the right gears to make absolutely massive wins. Read on to find out more.

Dream Run is a five-reel slot title with 25 fixed paylines. The title uses a street racing theme that will have players thinking of the Fast & the Furious action film series. The graphics aren’t that bad but do leave something to be desired. However, where the visuals fall short, the amazing soundtrack raises the bar. 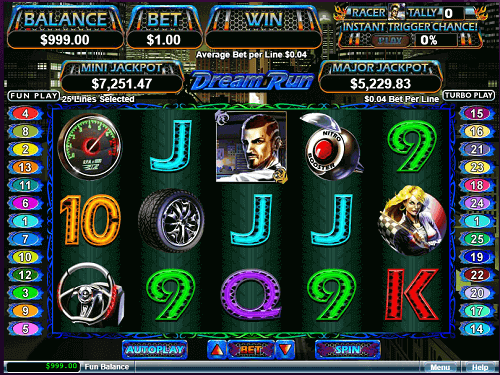 The title’s symbols are a combo of theme-related and playing card symbols (A, K, Q, J, 10, 9). Some symbols that took inspiration from the theme include a gear lever, a gun, a speedometer, a tyre, and a steering wheel, among others. The game does include a wild symbol. It is represented by the two racers and can be used to complete winning combinations. There is also a scatter symbol, which is a headlight.

Dream Run features one big bonus mode that will award players with piles of real money. It is activated when a scatter symbol on the board turns green. Players will then be given the chance to pick between five cars in a drag racing contest. Where you come in the race determines how many free spins you win. You can win up to 25 free spins in one go.

If you finish in third place or higher, players will trigger a second drag race where players can win a 100x multiplier. A third race is will activate if you win a multiplier higher than x7. If players aren’t able to get into the third race, they will go back to the main game with their winning doubled.

It is possible to participate in about to 10 races in a single rotation. Players get the chance to win one of the game’s progressive jackpots in the fourth race.

Dream Run is a pretty good RTG slot game. It makes use of an exciting theme, a good bonus mode and 96.5% payout percentage. It is for these reasons, we have decided to award Dream Run a rating of three out of five stars.