Realtime Gaming’s (RTG) Golden Glove slot game promises to take out US players to the ball game in a wonderful baseball-inspired title. Players get the chance to hit homeruns or eat hotdogs and popcorn as they spectate a major game in this title, all while standing the chance to win big real money prizes. Read on down below to find out more.

Golden Glove is a five-reel progressive slot game published by RTG. It has three rows and a total of 20 paylines. The game is themed around America’s favorite pastime – baseball! While the game’s graphics are quite dated, the overall ambience created by the game, including its soundtrack, creates the feeling that you’re actually at a live baseball came. 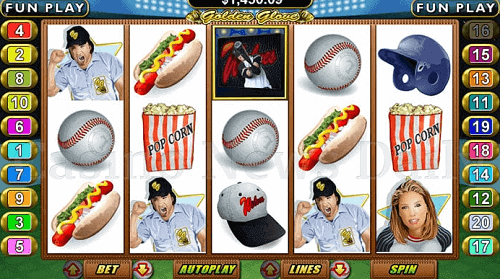 The title only makes use of symbols that relate to theme. Some of the designs players will see zooming across the reels include baseball helmets, balls, bats, a hotdog, popcorn, caps and trophies, among a load of others. The game’s wild symbol takes the shape of the batter, and he only appears on the middle reels. The golden glove symbol is the scatter. The symbol can substitute with the wild to create winning combinations.

Golden Glove features on major bonus mode. Players activate it when they land three golden baseball glove symbols on the reels. Players will get nine free spins. During the bonus mode, all wins are subject to a x2 multiplier.

Golden Glove is an interesting slot game with wonderful features. We particularly enjoyed the baseball theme, which just added to the overall excitement of gambling online. It is for these reasons we rate Golden Glove four out of five stars.