Walk down the runaways of fabulous exotic destinations in Realtime Gaming’s (RTG) High Fashion slot game. Tread down the carpet in ways that only the world’s most famous models can, and you may just earn yourself a payday comparable to thing stars’ salaries. Read on to find out more on how to do this.

High Fashion is a five-reel, three-row progressive slot game with 25 lucrative paylines. The game makes use of fashion theme that will make players think of famous people from the early to mid-2000s, such as Paris Hilton or Nicole Ritchie. The soundtrack is befitting of this Realtime Gaming slot inspired by blue steel poses and what not. 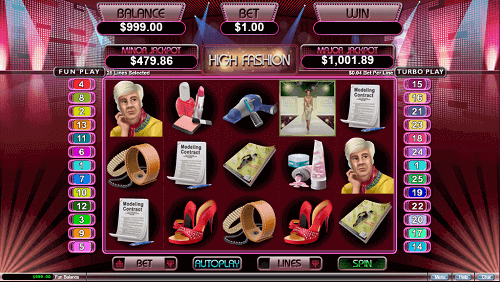 Symbols in the game consists only of designs that relate to the theme, which are naturally beauty related products given the theme. Images include cosmetics, shoes, jewelry, a camera, hair products, a modelling contract, a magazine and an agent, among others. The two model symbols are the game’s wilds, and help complete winning combinations. There is also a scatter, which is symbolized by the runway image.

High Fashion features two really fun bonus modes, which players activate by landing three or more scatters on the reels. The first mode is the runway bonus, which gifts players with five free spins. The wild will also cover the entire middle reel making for extra wins. Players earn five extra free spins when one of the model symbols appear on the first or fifth reel.

The second mode is that of the model bonus feature. The first and fifth reels feature locked wilds, which makes it easier for players to land winning combinations. Players should also remember that at any time they could land a winning combination for one of the game’s two progressive jackpots.

High Fashion is lovely game that offers some rather interesting bonus modes. We enjoyed playing it although the theme may be a little outdated in this day and age. It is for this reason we have decided to rate the title a total of four out of five stars.