Join the eternal battle between orcs and elves that has been raging since the Lord of the Rings was first published in Realtime Gaming’s ode to fantasy – Orc vs Elf! Pick a site and fight in a war to determine the final victor in this long battle, and you may just walk away with insane real money prizes. Read on to find out more.

Orc vs Elf is a five-reel slot game with 25 paylines with a wonderful betting range that spans from $0.25 to $25.00 per spin. The game makes use of a fantastical theme heavily influenced by the works of J.R.R. Tolkien. The game’s visuals and sound design are so immersive that players will actually think that they’re exploring the lands of Middle Earth (or New Zealand to say the least.) 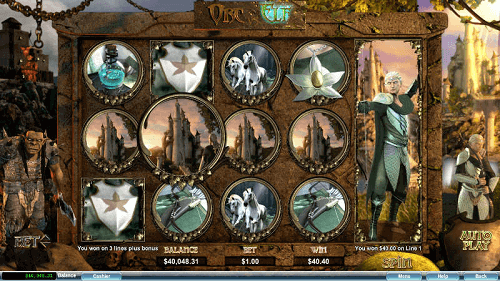 Symbols are made up entirely of theme-appropriate designs. This includes five elf-related and five orc-related symbols. The symbols change according to which major character (orc or elf) you choose at the beginning of the game. Examples of images include unicorns, shields, flower pendants and castles. With symbols being divided into two factions, it makes sense that the game has two wild and scatter symbols on offer. Both wilds (which are expanding orcs and elves) can replace all other symbols except for the two scatters (which are represented by two shields).

Realtime Gaming really put a lot into Orc Vs Elf in terms of bonuses. In total, the game offers players the chance to activate three bonus features, each with multiple variations that increase wins. These include the following:

Orc vs Elf is one of the most interesting Realtime Gaming slot titles we’ve ever played here at Golden Riviera Casino. With an enticing theme and great bonus features, we had a lot of fun with it. It is for this reason that we have decided to give the game a rating of five out of five.