Run through the Amazonian jungle, which, quite surprisingly, is filled with loads of wonderful prizes every American gambler dreams of in Realtime Gaming’s (RTG) Secret Symbol slot game.  Here players will fight off attacks from wild beasts which have a genetic predisposition to killing humans. Search for the treasures unidentified native South American civilizations are known for. Read on to find out more.

Secret Symbol is a five-reel progressive slot game published by RTG with 25 variable paylines. The game is very pretty to look at, with colors and designs which will make players feel as if they really are travelling through the jungle for themselves. Along with the game’s fun soundtrack, players will feel like they are about to embark on a journey worthy of being turned into an Indiana Jones film. 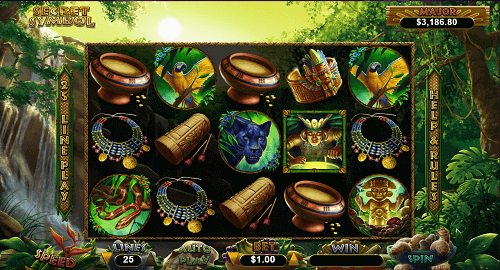 The title only makes use of theme-related symbols. Images American players can expect to see zooming across the reels include animals such as panthers, snakes and parrots, along with items more traditionally-related with a slot based on ancient South American civilizations, such as necklaces, bracelets, pots, knives, and statues. The game’s wild symbol is the Aztec chief, whereas the scatter is the pyramid.

RTG’s speciality is trying to make unique free spins bonus modes that continue to excite player, even if they do initially think they’ve seen it all before. So, if players land three pyramid scatter symbols they will receive ten free spins. A x20 multiplier is attached to all wins made during this bonus mode. As the game is a progressive slot, it will be pretty difficult to trigger the bonus though.

Secret Symbol is an amazing slot that promises players a good time and is filled with great real money prizes. It is a little hard to trigger the bonus mode, but the great jackpot is totally worth the effort. It is for these reasons we have decided to rate Secret Symbol a total of four out of five stars.