Travel back to the Jurassic period in Realtime Gaming’s (RTG) T-Rex slot game and discover a world filled exciting beasts, who are astonishing, scary and supposedly very clever. Dodge attacks, make the most of the bonuses available to you, and you may just walk away with some big real money prizes online. Read on to find out more!

T-Rex is a five-reel slot game with 25 paylines. It was first released by RTG in 2009. Although the graphics may show their age, and seem similar to Megasaur, the title’s authentic sound design more than makes up for this fact. In fact, you’re sure to feel as if you’re in a Jurassic Park if you play this game with headphones on. 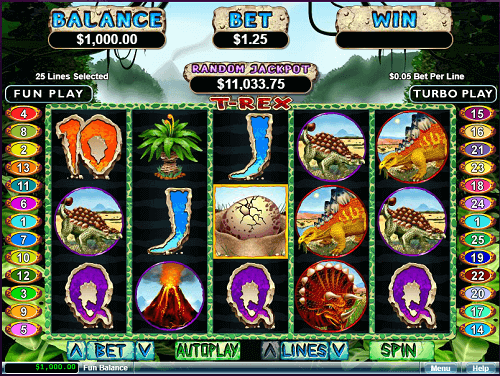 The title’s symbols consist of the classic playing card (9, 10, J, Q, K, A) and theme-related design combination. The symbols, inspired by the game’s theme, include a number of different dinosaurs like stegosaurus and triceratops, a volcano, and an oddly-shaped plant, among others. The game does have a wild in the form of the T-Rex symbol. It also has a scatter, which is a giant egg with a crack in it.

T-Rex has one major bonus mode, but a lot of other additions that are sure to earn you loads of cash. Basically, when players land three or more scatter symbols on the reels, they activate the free spins mode. It starts with a picking feature, which sees players win up to 10 free spins. If the wild appears on the reels, it may turn another symbol into a wild to make a winning combination.

It is also possible to re-activate the bonus mode while you’re in it by landing three scatter symbols again. It is important to remember that all winning combinations that are completed with wild symbols see their payout doubled.

T-Rex is an old RTG game at this point, but this doesn’t mean that it doesn’t have anything to offer US players. Our playthrough saw lots of wins and we had fun playing this wonderful dinosaur-themed game. It is for this reason we have decided to give it a rating of four out of five gold stars.