Explore tombs and ancient civilizations in Realtime Gaming’s (RTG) Treasure Chamber slot game. Find ancient treasure and grand prizes in this adventure-theme slot game filled with all sorts of wonderful surprises. Feel like you’re living in one of your own wild dreams as you rush through temples and jungles for riches beyond belief. Read on to find out more.

Treasure Chamber is a five-reel slot published by RTG. It has five reels and 20 paylines. From first impressions, it is plain to see that the game takes much inspiration from the hit Indiana Jones film series. Unfortunately, the title’s graphics don’t allow it to bring the idea of adventure to life the same way that the film series does. This may be due to the fact that the game is a bit old, but that said it is still able to create some excitement in players. 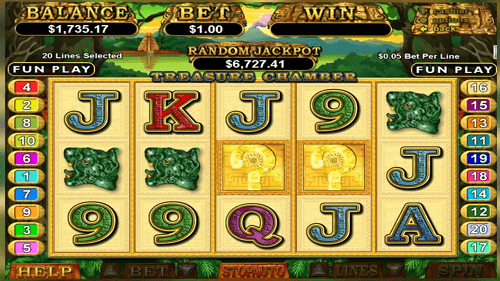 Treasure Chamber features one major bonus mode. Players activate it by landing three rose scatter symbols on the reels. The symbols do not have to appear in sequence for the mode to be activated. Players will then receive 20 free spins. All winnings from the bonus mode subject to a x3 multiplier.

Although it is not really a bonus mode, there is an additional feature that allows players to create more winning combinations. Basically, the game features a shifting symbol, when it appears on the reels, players can use it to change a symbol to another. This could be any symbol, including the wild.

Treasure Chamber is a veteran within the RTG catalogue. While the game may offer a fun gaming experience, we can’t really say that every player will truly appreciate it. Thus, we have decided to give Treasure Chamber a rating of three out of five gold stars.